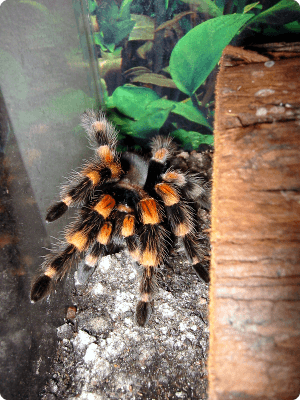 Most of the images and information on this site came from my experience of caring for Merbet. Unfortunately, Merbet passed away (naturally) as a mature male in March of 2006. Please enjoy the RIP Gallery created in his honor, an impressive gallery that includes some of the most dramatic tarantula fang pictures I’ve ever seen.In this site, I’ve included as much tarantula care information as possible; this page focuses on basic tarantula care (cage setup, heating, substrate, and feeding). There is also a page that illustrates the molting process.  All of the pictures on this page are property of Roamingcattle.com. If you would like to use any of my pictures from this site, my molting site, or my pictures site, please contact me.

A five to ten gallon tank should be adequate for most spiders. Include a shelter/hiding place for your spider, such as a ceramic pot, a log, or cork bark. Make sure to buy supplies at a store and sterilize all items taken from outdoors. If you use something from outside, it may contain pesticides that can harm or kill your spider, so using objects found outside is not desirable. Try to avoid putting sharp objects in the tank–the spider’s abdomen is very fragile. If the spider falls on something sharp and cuts open his/her abdomen, it will probably lead to death. Even if you don’t handle the spider, it can still fall — I have witnessed my spider fall off the top and side of the tank many times.  Just a note — using too large of a tank or excessively decorating a tank can make it difficult for a spider to find food, ultimately resulting in starvation.

My last point is that you should make sure you have a nice, secure top on your tarantula’s cage. My tarantula is VERY fast and can squeeze through very tight spaces. So, if you don’t have a secure top on your cage, you might wake up with “Hairy” giving you a hello kiss. 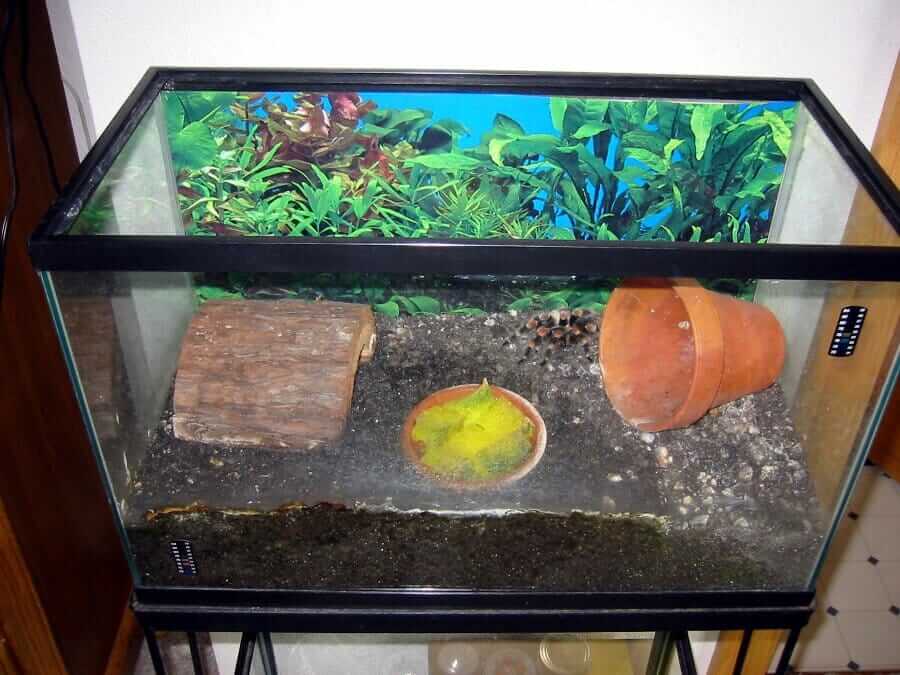 Try to avoid heating rocks, for they can very easily burn a spider. Heating pads are acceptable for ground dwellers, but not very logical for burrowers. Spiders will burrow if they get hot to avoid heat and the sun. If a very large quantity of heat is coming from the ground and they are burrowing to get away from the heat, then the heating pad may be creating more problems than not.

I have used a 50 watt red overhead heating light, and it seemed to work fairly well. On thing I find interesting is that tarantulas can’t see red light, so you can use a red light (any red party light you can pick up at a superstore) to watch your spider go on hunting trips without bothering him/her. I’ve seen pictures of the light being placed physically inside the cage, but advise against this practice because of the possibility of the spider getting burned. 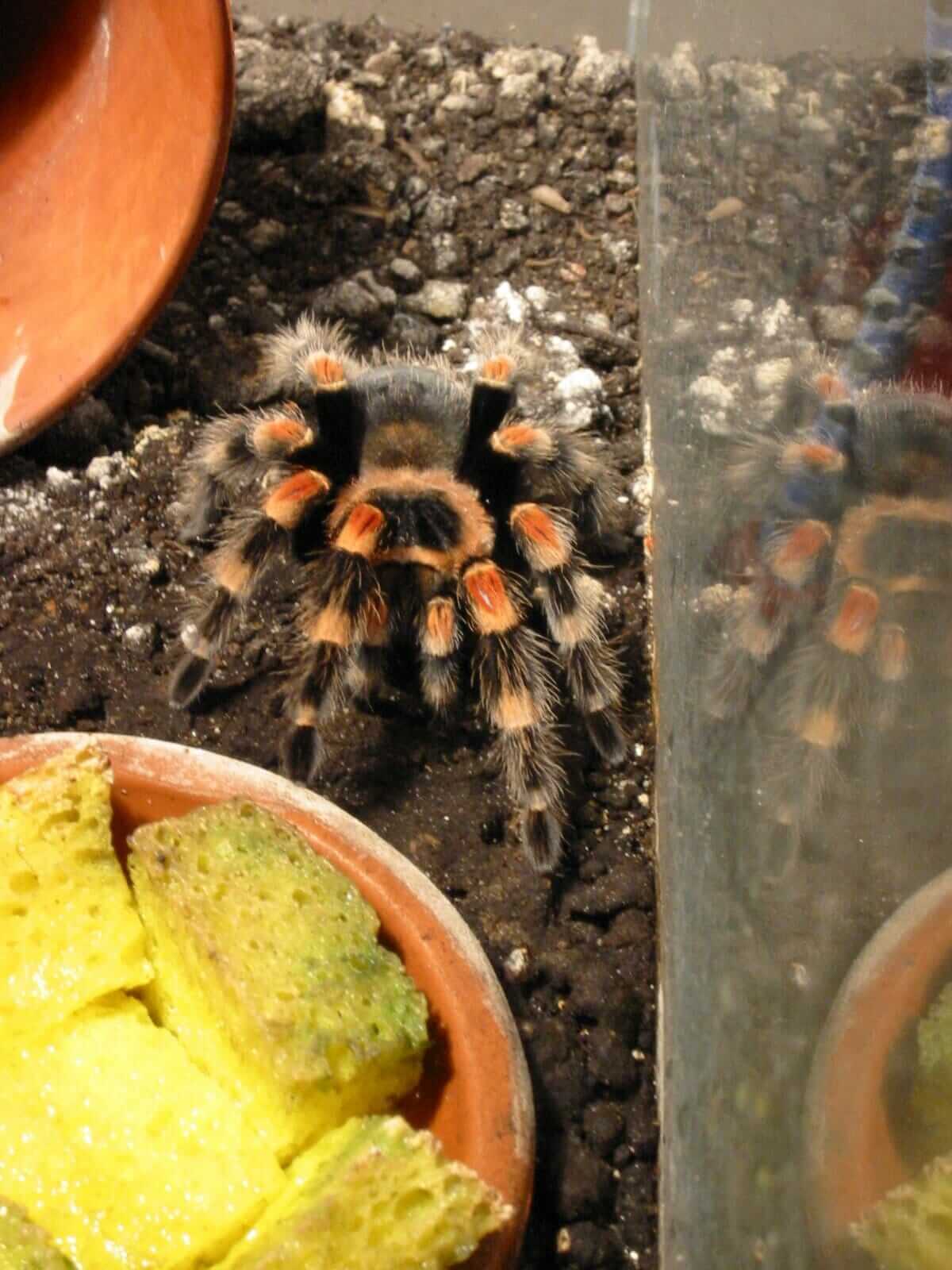 I have had considerable experience with different substrates. I first started with vermiculate, but my tarantula absolutely hated it. Some sites advertise vermiculite as a very good substrate, but it really irritated my spider, causing her to spend most of her time hanging on the sides of the tank and on decorations. Tarantulas.com states that vermiculite possibly contains carcinogenic fibers, and I am not very excited about having my tarantula live on carcinogenic fibers.

I then tried various mixtures of soils, with an acceptable mixture being about 40% sphagnum peat moss, 20% potting soil, and 40% topsoil. This is the only mixture in which Merbet has burrowed.

Then it came time to replace the substrate (discussed later), and couldn’t find a mixture that the spider would accept. I finally settled on coconut fibers (sold as a block, such as Eco Dirt). The coconut fibers seem to work very well. A coconut fiber substrate is (in my opinion) the best all-around substrate: it retains moisture, is very safe and natural, and is usually easily accepted by spiders. I would say to have around 3-5 inches of moistened substrate at the bottom, especially for a burrowing spider such as the Mexican Red Knee.

I found it’s significantly easier to start out with the right substrate than to have to remove the spider and change the substrate until a suitable substrate is discovered. I would recommend changing the substrate around every 8 months, unless it looks extremely dirty (nice pun) before then. 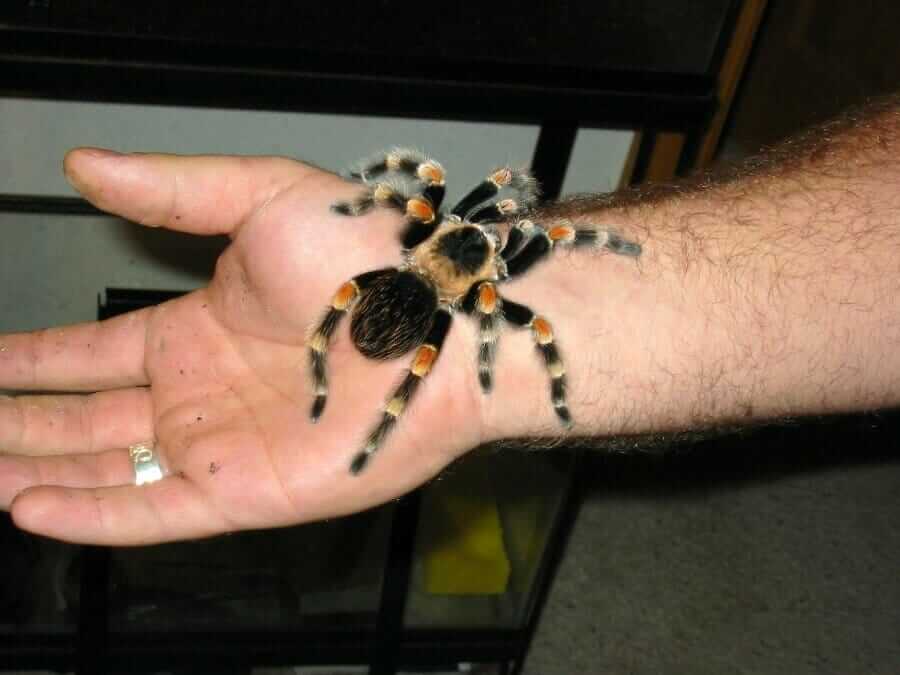 If you want to keep your spider safe during feeding, be smart with what you place in the cage. Don’t attempt to feed the spider anything too large (based on the size of adult tarantulas, I find large crickets to be very safe). Also, don’t attempt to feed the spider anything apparently dangerous (for example a bee or wasp). Make sure any insects taken from the wild are pesticide free or they could be very unhealthy for the spider.

I keep crickets in a separate 1 or 2 gallon plastic aquarium. The cardboard from a toilet paper roll makes a great hiding spot for crickets, and a dish with fish food or gutload for nutrition and cut up fruit for moisture will keep the crickets alive and healthy. Don’t forget to keep a full water dish inside the spider’s tank. I have a few sponges in my spider’s tank so crickets and my spider stay safe, and I’ve read that the sponges make it easier for tarantulas to drink water. 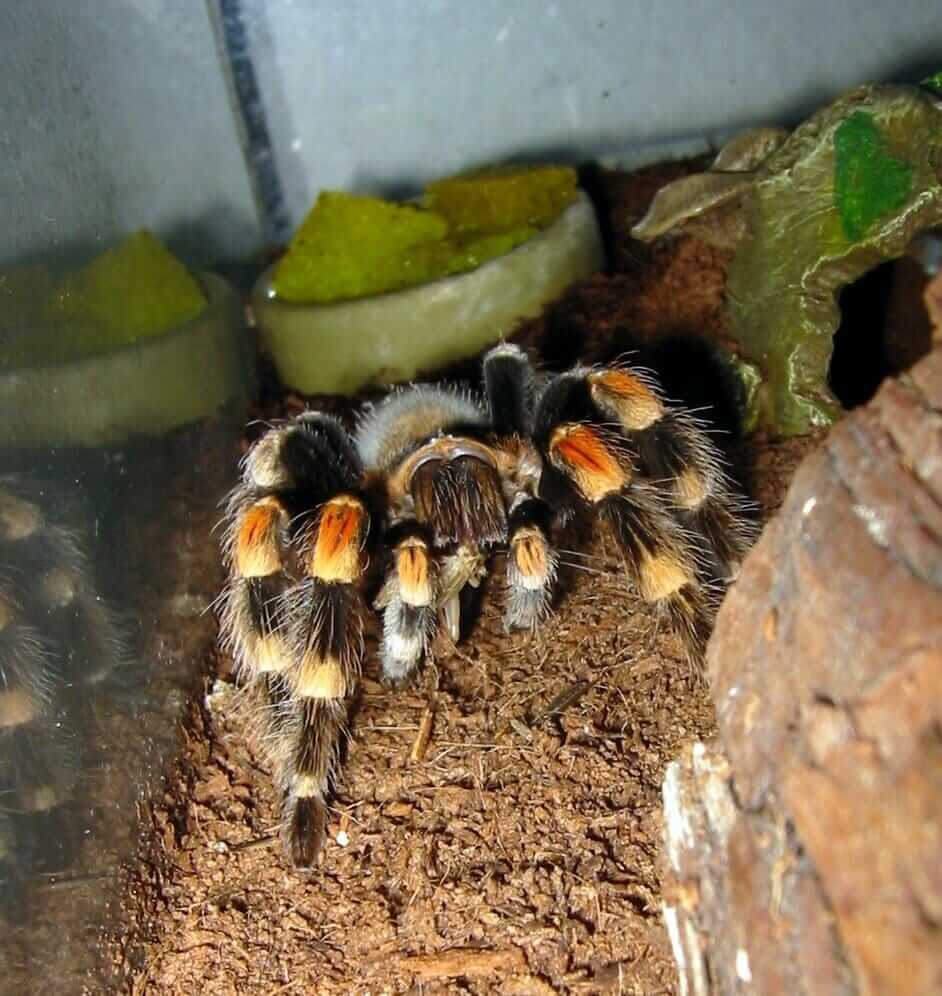 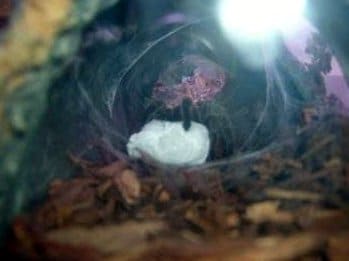 I decided to add this section after receiving an inquiry concerning a tarantula egg sack. I personally had never seen an egg sack, nor understood what it meant to have an egg sack. After doing some research, I discovered a few important things. In the picture to the right, the tarantula is protecting her egg sack. She will do this until the egg sack hatches, which takes around 4-6 weeks. The quantity of spiderlings that arise when the egg sack does hatch is truly phenomenal, as illustrated at http://backalley.net/rosehair/.